By Dave DiPasqua3 August, 2018No Comments

NEWTOWN SQUARE, PA – The 2018 campaign for Marple Newtown football presents a different look for the Tigers as they enter this season for the first time without its two-time All-Delco quarterback Anthony Paoletti.

Taking on those leadership responsibilities this season is none other than senior tailback Marlon Weathers.

Expect him to become the leader and focal point of the offense in head coach Chris Gicking’s fifth season at the helm.

The reigning Delaware County rushing leader looks to build on his excellent junior season of over 1,500 yards and 21 touchdowns.

The stats are only part of the story as Weathers plans to step up even more and become a leader in 2018. 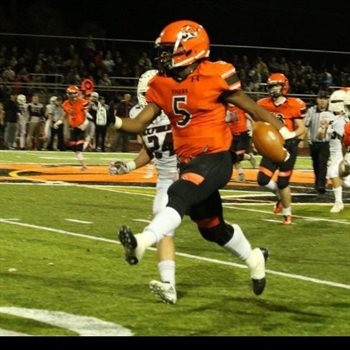 Weathers to carry the load in 2018 for Marple Newtown (Photo: Weathers Hudl Account)

He continued to state how a heavy dose of the rushing attack can be anticipated.

“We are young, but we are going to ground and pound you.”

Fans caught a glimpse of this mentality towards the end of last season with the offense relying on the shoulders of Weathers.

He surely did not disappoint with the spotlight on him, propelling the Tigers to the District 1 Class 5A semifinals.

In the playoffs, the tailback posted 484 yards and six touchdowns in three contests.

With that being said, Weathers gained valuable experience on varsity since his freshman season.

Weathers phrased it as “live experience,” having been involved Gicking’s offense while also reflecting on the importance of learning from previous games.

The numbers below reveal his continued increase in production:

Weathers already holds the school record for rushing yards in a career, which was previously held by Adrian Sapnas at 2,923 yards (2013-14).

As the season quickly approaches, expect Weathers to be the first Tiger to eclipse 3,000 yards in a career in the season opener against KIPP DuBois on August 24th. He is six-yards shy of that accomplishment (2,994).

If he were to surpass that total, he will become the 28th player in Delaware County history to accomplish this feat.

The last player in the county to break the 3,000 yard barrier was Upper Darby’s Isaiah Bruce (2014-15), who currently plays for West Chester University.

Cardinal O’Hara’s Kevin Jones still sits atop the list with a ridiculous 5,790 career rushing yards. Behind Jones in a distant second is Strath Haven’s own Dan Connor at 4,570.

Weathers has found the end zone an impressive 38 times with a career long of 94 yards against Strath Haven.

His touchdown against Strath Haven will be played on his highlight reel for years to come:

This highlight reel play is certainly one of many as Weathers gears up for another playoff push.

One of the top moments he recalled was winning the Central League title his sophomore season.

What makes Weathers so dangerous is his ability to be a complete back. In Gicking’s aerial attack the past three seasons he compiled 43 receptions for 382 receiving yards and five touchdowns.

The combination of Paoletti and Weathers gave the Tigers a lethal 1-2 punch on offense that averaged nearly 28 points per game.

Lets see what the Tigers have in-store for us this season as we are less than 25 days way until the season and home opener on August 24th against KIPP DuBois inside Crozer-Keystone Stadium.